Predictably the poor visibility meant that quite a few runners went off course and missed some checkpoints. For some runners this meant a lengthy detour, adding extra climb and distance to their route to get back on course whilst for others it resulted in a DNF as they failed to visit all the checkpoints.  The attached Strava traces show some interesting route choices! 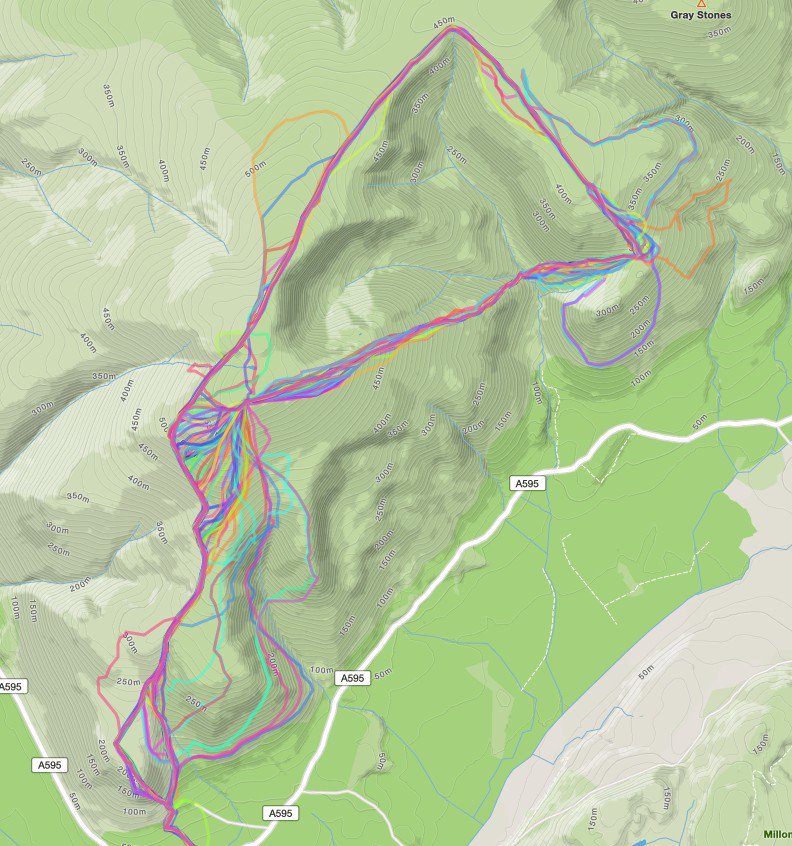 Bad visibility is not uncommon in fell races where navigation skills are seen as a key requirement for competitors and carrying a map and compass is compulsory.  However, carrying a map & compass is one thing, using them is another and in the heat of the race it’s easy to simply play follow the leader in the hope that someone at the front of the line knows where they’re going!

So what tips are there to avoid going wrong or to get back on track if we do find ourselves going astray?

Before the race spend some time looking at the map to familiarise yourself with the route and try to memorise some key aspects of the route. Look at some of the key features you would expect to see during the race. Think about what direction you will be heading and if it will be uphill or downhill. Work out the distance between each checkpoint and how long you think it might take.

Jot some key notes down on your map or back of your hand such as compass bearings, estimated time taken or features to look out for. (see D’s below) 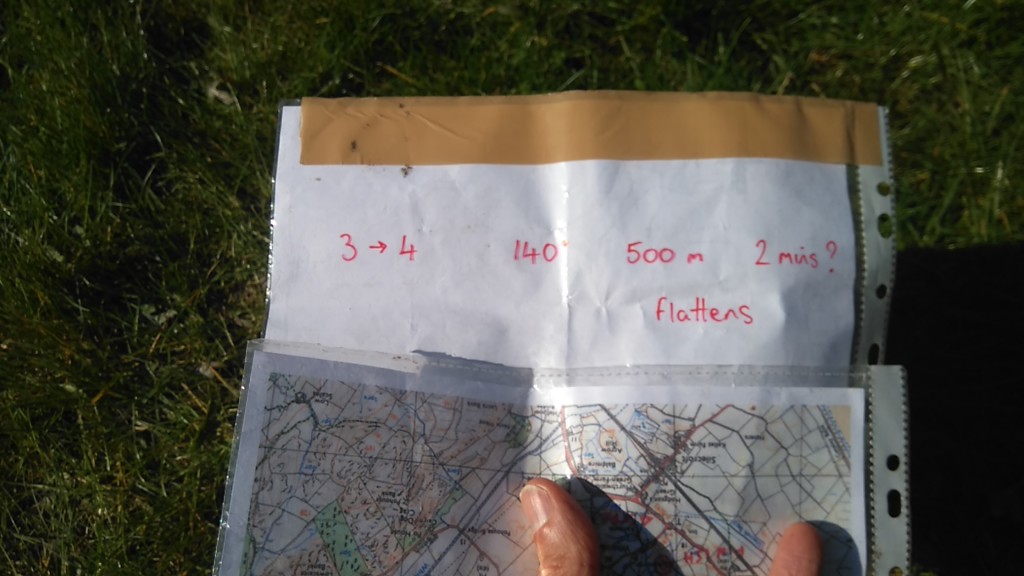 jot some notes on the map 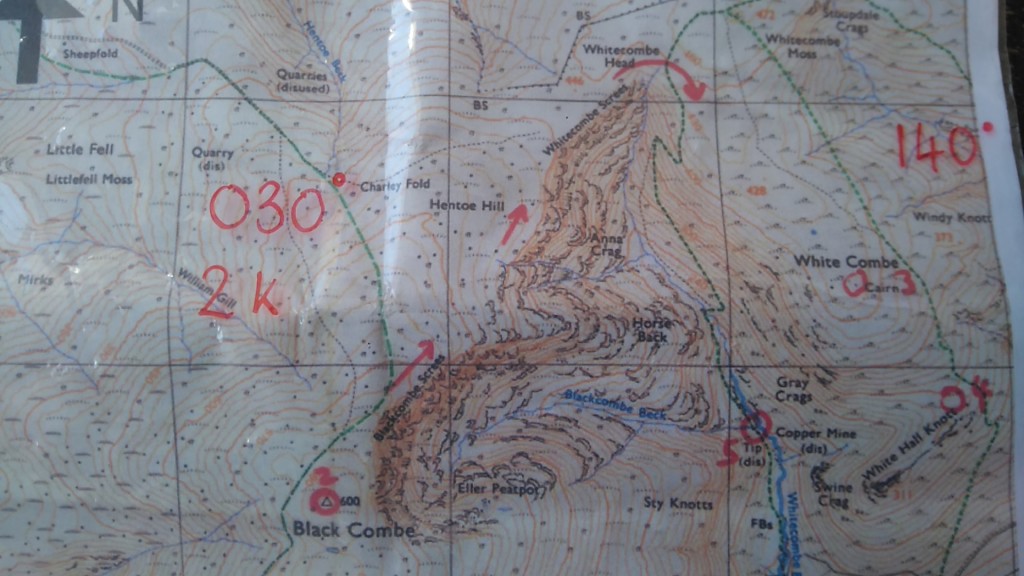 Break the race down into legs between checkpoints or obvious features and think of the following:

Direction – which direction should you be running? This could be approximate eg Northeast or precise eg 38 degrees.

Distance – how far is it from one feature or checkpoint to the next?

Details – should you be running uphill, downhill or flat? Should you pass any noteable features eg streams, valleys, walls, buildings etc. Can you identify something that will tell you you’ve overshot and travelled too far?

Duration – how long should it take you to get from one feature or checkpoint to the next?

Get your compass out early.

Lots of runners seem to carry map and compass in their bumbags, only getting them out when they get lost. By then it’s too late, they are meant to stop you going wrong in the first place! Running with your compass in hand will let you have a quick glance to check that you are going the right way whereas a quick look at the map can remind you that you should be heading downhill for example.  This would have helped in the examples below. 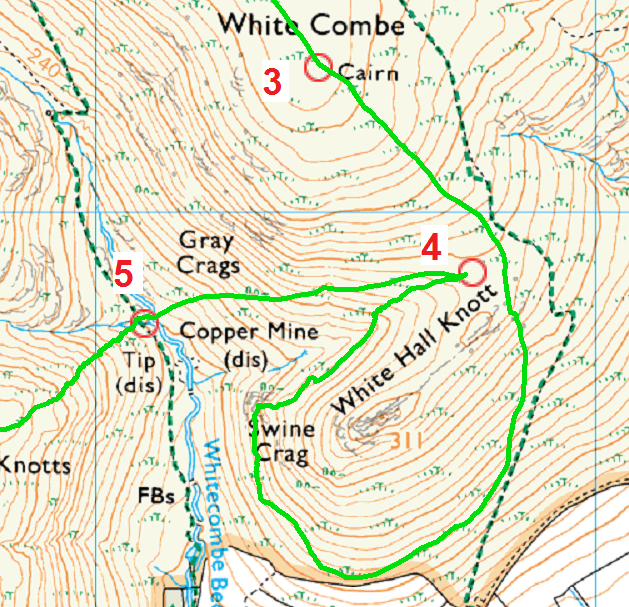 The green trace shows how a runner failed to navigate between checkpoints 3 and 4. They narrowly missed 4 and continued downhill then around and back up to eventually locate it. Using the D’s how could they have avoided this?

Direction – they weren’t far off, heading roughly southeast and only missed the checkpoint by about 100 metres but didn’t see it in the fog.

Distance – the distance from checkpoint 3 to 4 is about 500 metres however visibility was less than 100 metres so they wouldn’t be able to see checkpoint 4 until very close (they obviously weren’t close enough!)

Details! – this they could have used. The map shows that after checkpoint 3 the ground drops steadily then flattens off for around 200 metres (where 4 is located) before dropping steeply again. If the runner had noticed the ground flattening they would have known not to continue steeply downhill.

Duration! – this should have been a give away. How long does it take to run 500m metres downhill? Work it out; if you can do a 10k in an hour then you can do 1k in 6 minutes (so you can do 500m in 3 minutes) As this is downhill in a race it will probably be faster than that for most runners. A quick look at the watch or a press of the lap button at checkpoint 3 and if you haven’t arrived at 4 two minutes later then it’s time to stop! 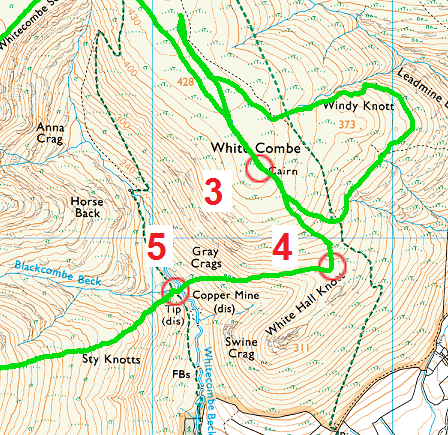 In example 2 the runner leaves checkpoint 3 heading southeastwards towards 4 but then swings off to do a huge anticlockwise loop, visits checkpoint 3 again! and then continues successfully to checkpoint 4. What could they have checked?

Details! – the route from 3 to 4 is downhill and then flattening out. This runner started downhill but then contoured on flat ground for almost half a kilometre (crossing two streams) which should have alerted them that they were going wrong.

I believe people think that you have to be very skilful to navigate in bad visibility whereas really it’s just about some basics. You don’t have to be able to identify every tiny kink in the contours, just being able to run in the right direction is a start! Remembering the four D’s will help as will getting lots of practice. Take the time to go out in bad conditions and run with map & compass in hand. Get to know how quickly you cover a kilometre and if you have a GPS watch check your trace afterwards to see where you went. Don’t be afraid to make a few mistakes, get disoriented and find yourself again. Much better to be doing it on a training run than halfway through a championship race!

Note – I’m certainly not perfect and have also fallen into the trap of following the crowd rather than checking the map.  I just don’t do it as often anymore!