The climb up Crowden is a challenge for any fell runner: uneven, loose, slippery and so steep in its upper reaches that most people will be slowed to a hands on knees walk.  But the rewards are fantastic views and good running on the path flanking the Kinder plateau.

Accessed from Upper Booth rather than Edale, Crowden sees less traffic than its neighbour Grindsbrook Clough but shares the same characteristics.  Starting in Edale I work my way through a network of fields and footpaths to Upper Booth and immediately take the path through the woods by the stream which leads to open country.  The path emerges abruptly from the trees giving a view of the clough as it rises northwards, steeply towards the guardian of Crowden Tower.

I stop to take in the view for a few moments before running again eyes fixed to the ground; the path is rough, skipping over boulders and flitting from one side of the brook to the other as it seeks the line of least resistance.  As the clough steepens to enclose the brook the path leaves to take the left flank of the hill below the imposing gritstone sentinel of the tower.  The gradient eventually eases and I take a rest, looking back at the route far below.

Turning right I pick up the path to rejoin the brook where it emerges off Kinder, its peaty brown water pooling briefly before tumbling down the boulders to the valley.

The running becomes easier now as the path follows the plateau edge, firm and sandy with large flagstones laid in sections to prevent erosion.  I can take in more of the view now and soak up the vistas as I progress eastwards, the steep sided Grindsbrook Clough, the rocky Ringing Rodger further ahead and way across the valley the twins of Lose and Win Hill looking small from this lofty setting.  Hundreds of thousands of years of wind and rain have shaped the gritstone outcrops into strange shapes, nature’s own sculpture park .

After a short run along the edge path I turn left and head northwards to cross Kinder at its narrowest point to Blackden Edge and the northern hills come into view.  Just before I reach the north rim of the plateau I chance upon a pool reflecting the blue of the sky.

I reach the edge and view from here is equally impressive, Blackden Brook drops down to the artery of the snake road far below and on the horizon the distant hills of Bleaklow and Howden Moor.

Running eastwards I pass Madwoman’s Stones, wondering about the story that must be behind their odd name, and swing round southwards to cross the head of Jagger’s Clough.  The sky is cloudier now and sunbeams break through as I reach the Druid’s Stone, again the name conjuring thoughts of the history behind the name.

Towards the end of the run now I drop below the imposing rocks of Ringing Roger that stand tall above the village of Edale and pick up the zig zag path leading down to Grindsbrook.

I pause one last time to look back to where I stood earlier, taking in the view up the steep valley of Grindsbrook reaching westwards onto Kinder.  Then its down to the fields and onto the road back to the start, happily tired. 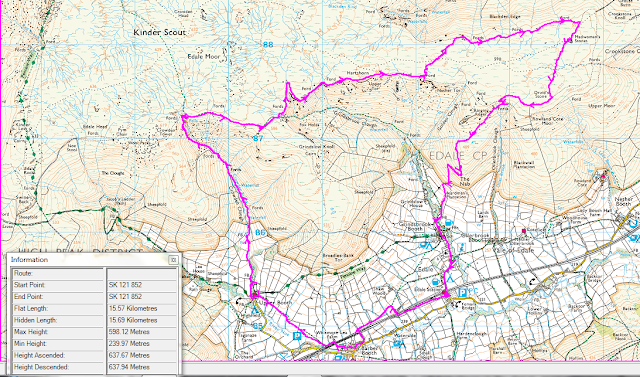 For information on joining me for a guided run visit; http://www.fellrunningguide.co.uk/guided-runs-2/