Outdoor Map Navigator (OMN) by Anquet is a digital mapping platform that allows you to access maps on your phone and computer.

An annual subscription gives you full GB OS 1:25,000 Explorer and 1:50,000 Landranger maps whilst Harvey 1:25,000 Superwalker and 1:40,000 British Mountain Maps can be purchased individually. Once the free OMN software is downloaded and you set up a cloud based account you then have access to all of the maps on your PC and also on your phone via the OMN app. There are lots of benefits to having mapping on your computer and phone, here are some of the ways I use it. 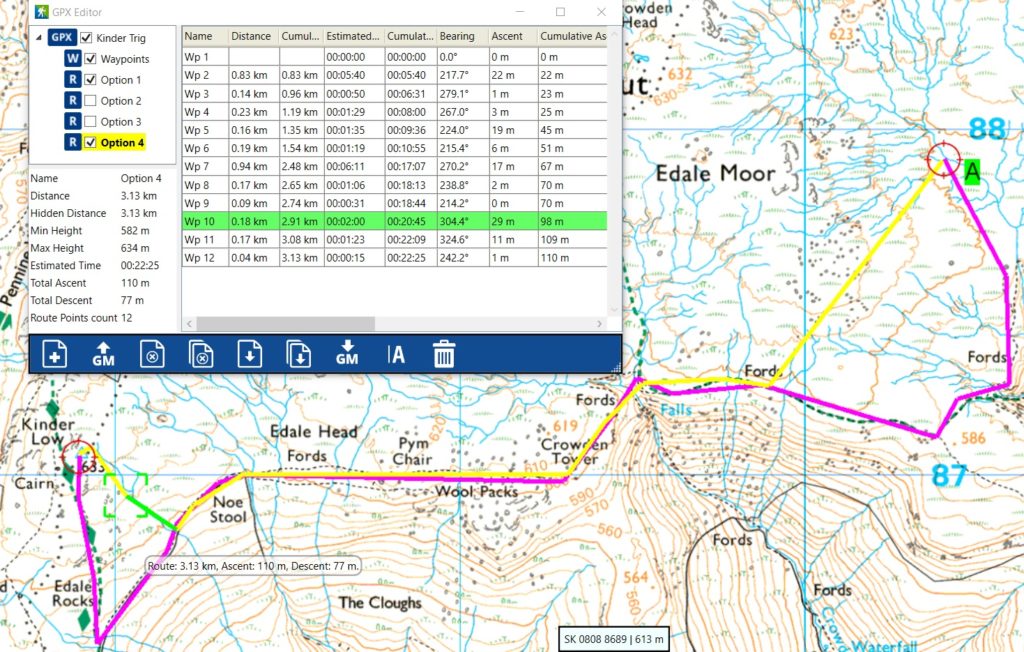 Rather than take a full map out on your walk or run Anquet allows you to select and print the relevant section and just print that. You can print to accurate scale or enlarge it if your eyesight requires. I tend to print the section I need on A4 paper and either laminate it or seal it in a plastic wallet to prevent it getting wet. That way there’s no battling in the wind trying to find the right bit of the map and it is easy to fold and carry the map or put it in a pocket. If the section gets tatty I just print another rather than having to buy a whole new paper map. 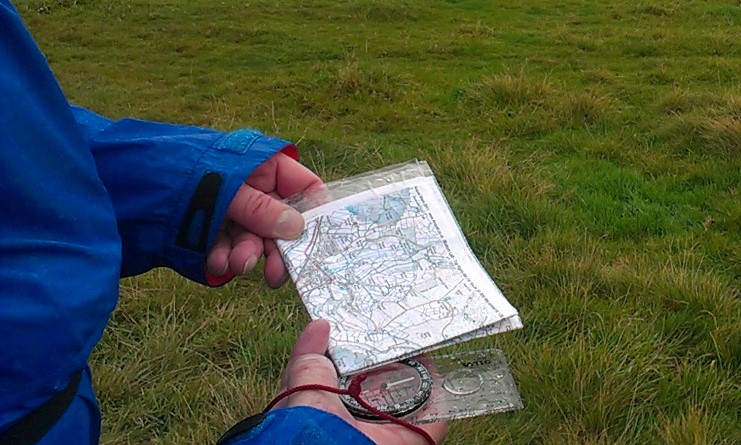 The OMN software is excellent for planning routes on a computer. It’s easy to find accurate grid references and so create waypoints (for example race checkpoints or hill summits) and draw routes between them. The software automatically calculates distance and elevation for each leg so you can decide which route suits you. You can enter your estimated pace (with additional time for climb as with Naismith’s rule) so that you can get an accurate idea of how long a run or walk will take. The software shows you the bearings for each leg which can be really useful as it saves you having to take a bearing off the map – if you were trying to do this in bad weather or whilst in a race there’s more likelihood that you’d make an error than if you’d plotted the bearing beforehand. This picture shows a comparison of two route choices; the long way round or a shorter but steeper direct route with distance, ascent and estimated time for each.

In 2015 I was course planner for the Rab Mountain Marathon in Snowdonia. I did most of the planning using Harvey maps on Anquet software. One great thing about having the maps on a PC was that I could zoom right in to identify subtle features and get accurate (10 figure) grid references which I plotted as waypoints on the map. At a later date I went out to visit these locations to see how viable they were as “Controls” for the event. Once all the controls were marked it was then possible to plot the most likely routes that competitors would take and thus get a fairly accurate distance and elevation for each course. It was also possible to then predict the winning times. 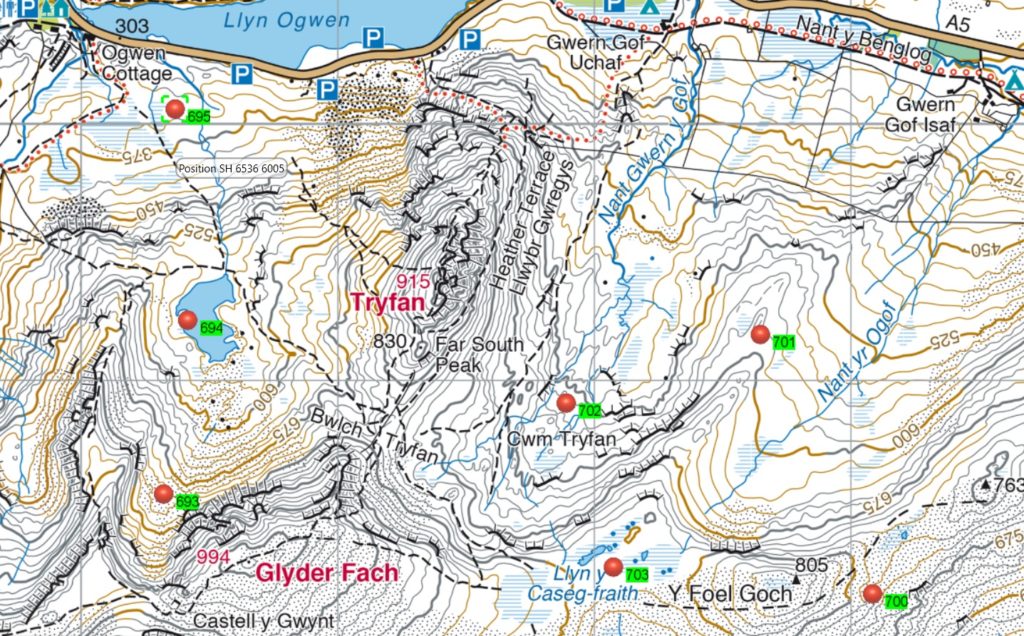 Another use of the software is the ability to look back on a route, maybe a walk or run and see exactly where you went – it might not always be where you had planned to go! OMN allows you to import a GPX trace, e.g. from a Garmin or similar sports watch and the trace will show your exact route. This image shows 2 routes (downloaded from my Garmin watch) of different ascents of Elidir Fach on Paddy Buckley rounds. These were both done at night and it is interesting to see slightly different route choices each time. Sometimes at night you don’t know exactly where you’ve been! 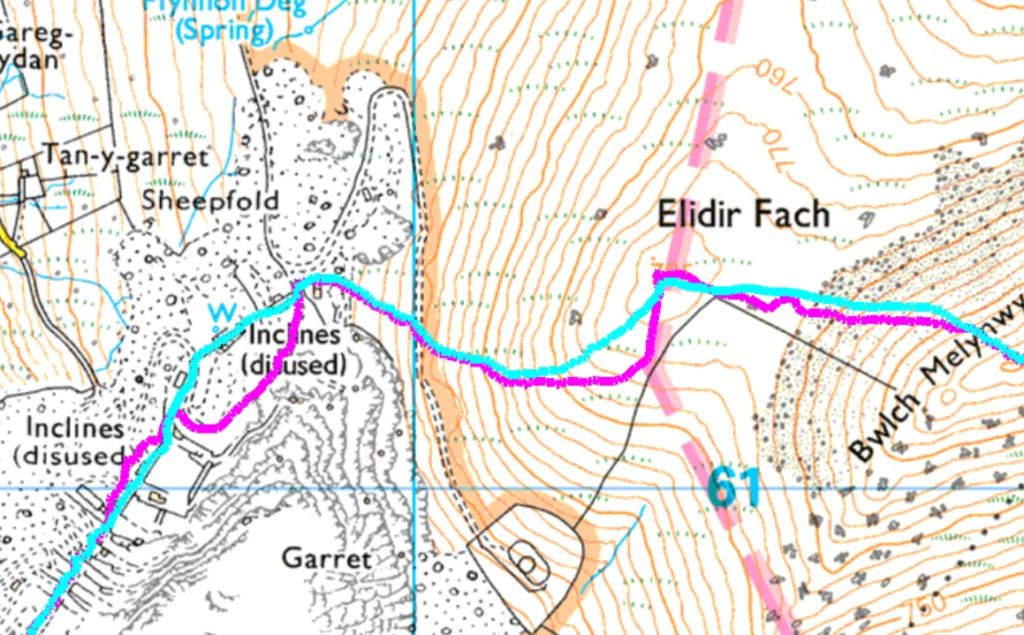 Slightly different routes on the Paddy Buckley Round

Depending on the subscription level you take out you can get Ordnance Survey map updates as often as every 3 months meaning that your map never goes out of date. The new fence lines shown on the updated map below would be really useful if you were navigating across Cartledge Bents in the fog!

Spot the difference? New boundaries and paths on the updated O.S. map

Any map updates, plotted routes or imported routes can be synchronized with your cloud account so that they are available on different devices such as your smartphone.

Note – please do not rely on using just your phone to navigate by, especially in remote areas. Learn to use map and compass and use the phone alongside these.

As well as using OMN on computer you also can use it on a smartphone via the OMN app. With an internet signal you can access everything in your account; maps, plotted routes, waypoints, tracks etc. As you wouldn’t want to rely on having internet access whilst out in the hills you can download the maps that you need to your phone and use them without an internet or mobile signal. With your phone’s location settings enabled you can get an accurate fix showing your current position and grid reference (I opt for 8 figure in settings) and you also can record a tracklog which draws a trace on the map showing where you have been. Be aware that having your phone’s screen on for prolonged periods will drain the battery as will using it in cold weather – see note above!

As on a computer, it is possible to plot a route by using the touch screen on your phone although for ease and accuracy it I’d recommend doing this on your computer then uploading it to your phone. Cold, fat fingers are a lot less accurate than a big screen and a computer mouse!

If you want to go for a walk or run and look back afterwards to see exactly where you went you can record a tracklog on your phone. You simply open the app and start recording when you set off. The route (track) that you take will appear as a line on the map. When you finish, stop the tracklog and details such as time, distance elevation etc will be saved and you can look at the traced line to see where you went. This image shows me using the phone app during a run – the red circle is my current position and the pale blue line shows my route. 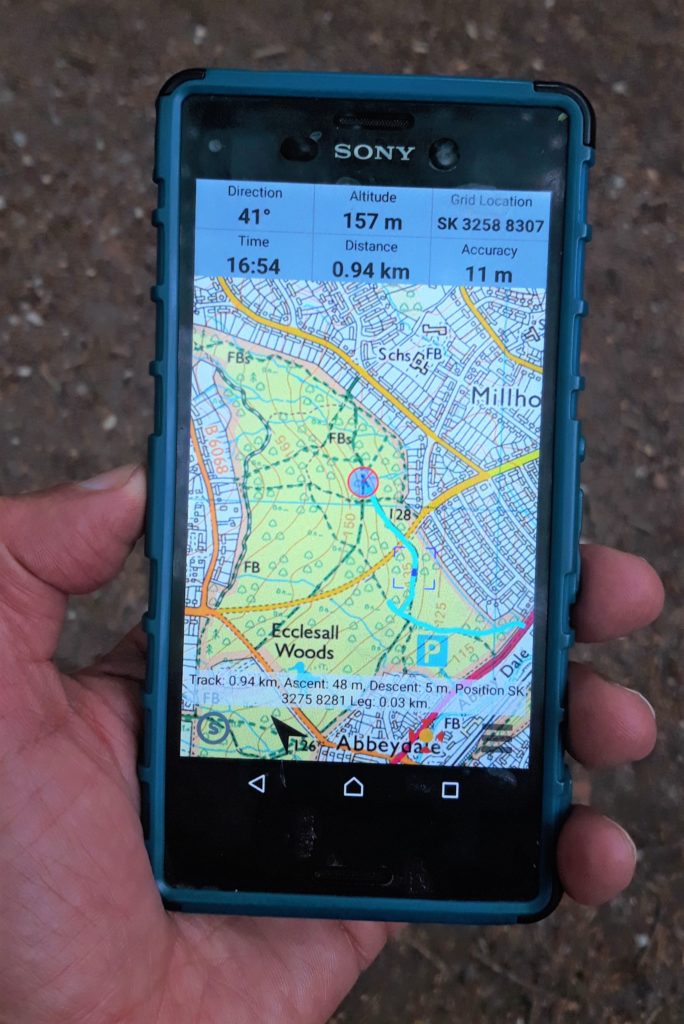 If you have uploaded a route to your account, either by plotting it on the map or uploading a GPX file, it is then very easy to follow it using your phone. The route will show up as a coloured line on the map as will your current position (via satellite) which shows if you are on the route or have deviated off it. I work on events such as Skyline Scotland where all the race routes are marked out with flags for the runners to follow. This involves placing flags over many kilometres of mountain terrain, sometimes in bad weather yet it is vital that the race route is marked accurately. Having the exact route on a phone which can be checked whilst placing the flags helps ensure that the race route gets marked correctly. This picture shows the Ring of Steall race route (purple line) loaded onto my phone for use whilst course marking. 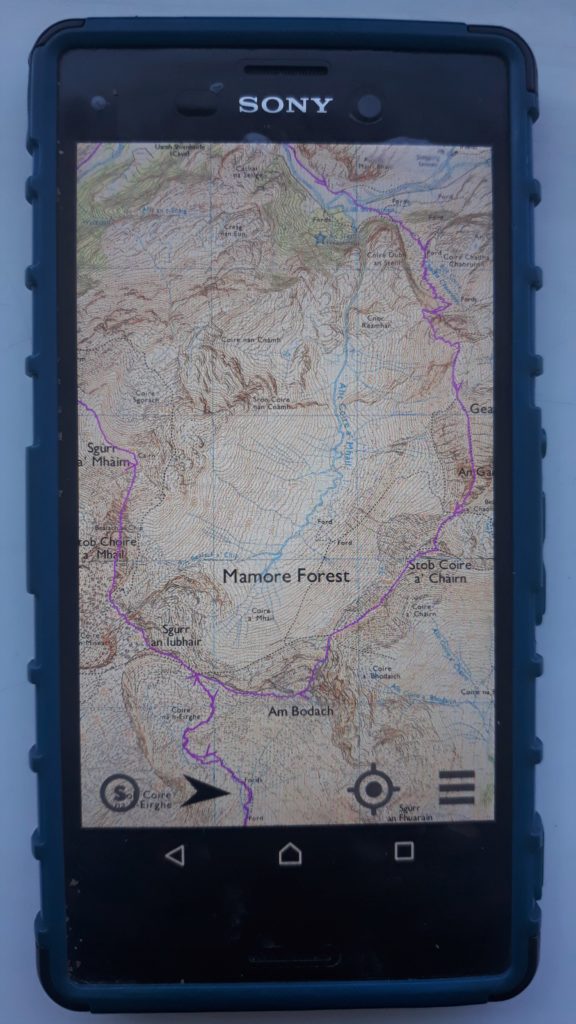 Being able to see an accurate trace of where you’ve been and where you are can be very useful in helping you prepare for certain races. The High Peak Marathon is an overnight race across some remote and pathless Peak District terrain and “reccying” the route by trying out different route options can make the difference between getting a dry line and ending thigh deep in bog. This image shows how I looked at two different route options for one particular section of the race. As the use of GPS is not allowed during the race I needed to know accurate bearings and timings which I was able to take from the tracklog I recorded. 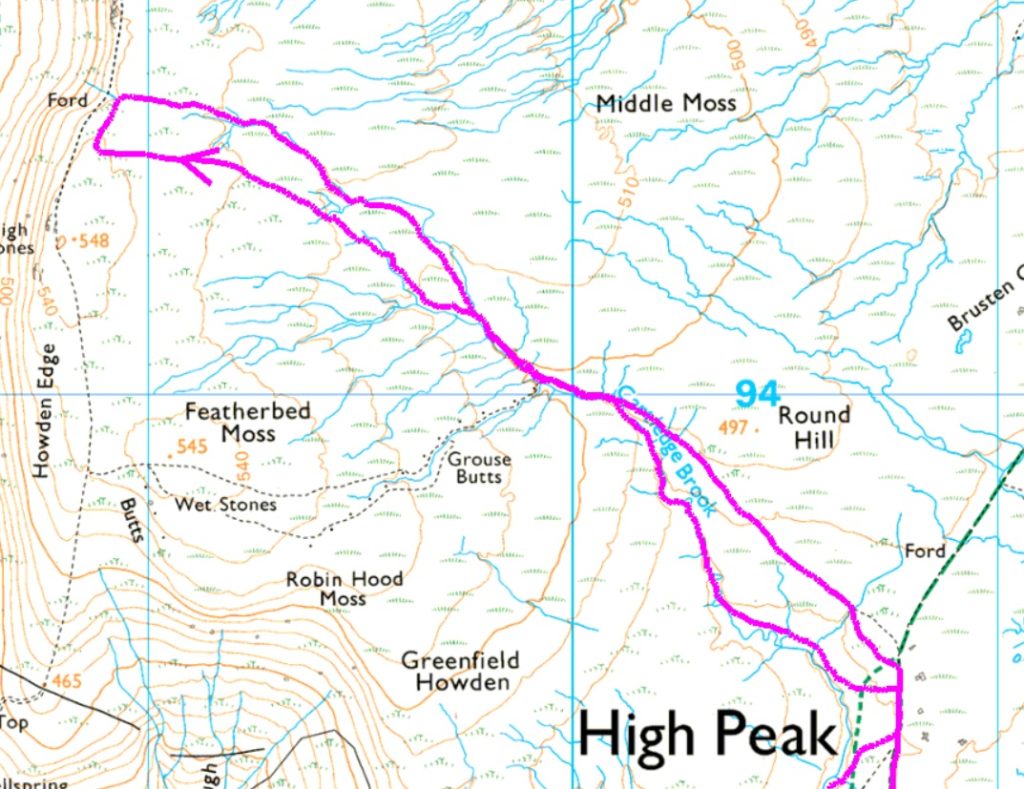 As a Learning Tool

GPS devices and maps on phones get a lot of negative press but if used correctly they can be valuable learning tools. They can actually help you improve your navigation. I use phone mapping on my navigation courses to allow people to review their decisions and check the accuracy of their navigation. The following image is from a night navigation course where the participants were trying to follow a bearing from A to B across open moorland. They should have been heading on a southwesterly bearing at all times but the blue circles show that on two occasions they were actually heading due west. Being able to show them their actual route immediately afterwards was quite enlightening for them as they swore that they had constantly been heading SW. The satellite doesn’t lie! 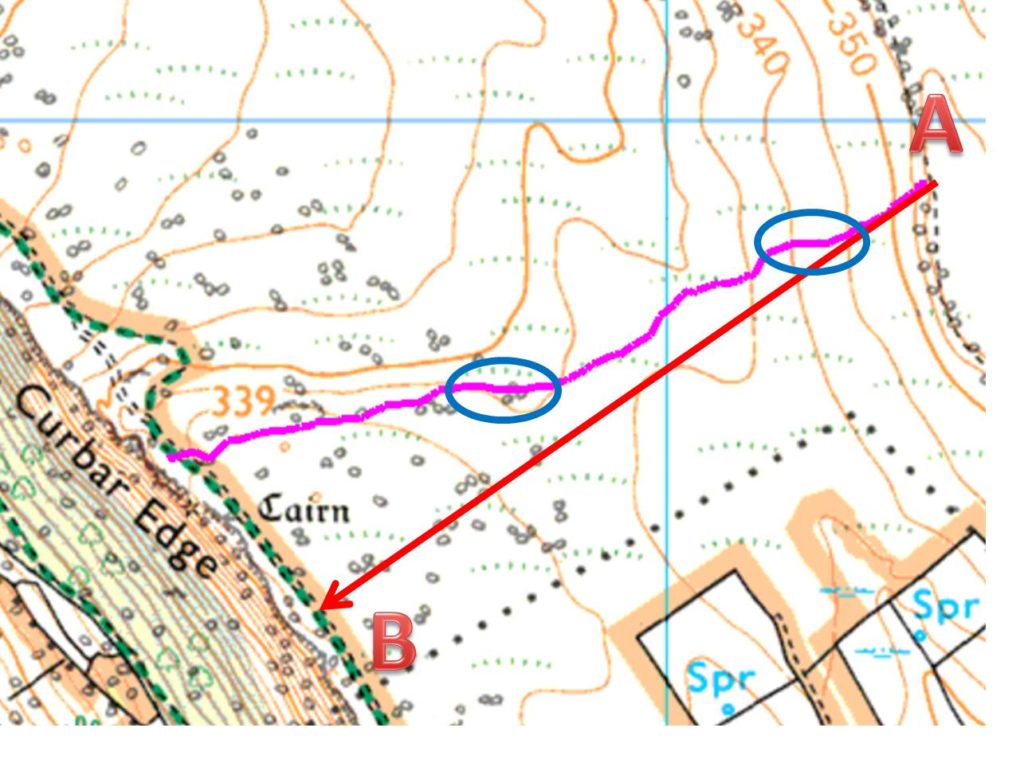 Although you are somewhat limited by the size of the screen you can simply use the map on your phone as you would a paper map. Putting the phone into airplane mode will prolong the life of the battery. I actually use an old phone without a sim card that has maps installed onto it that I use when practising or teaching navigation. One advantage is that you can really zoom in to see subtle contour features, particularly useful if you usually need reading glasses. This image shows a screenshot from my phone where I’ve zoomed in to see fine detail compared to the same area on a paper map. 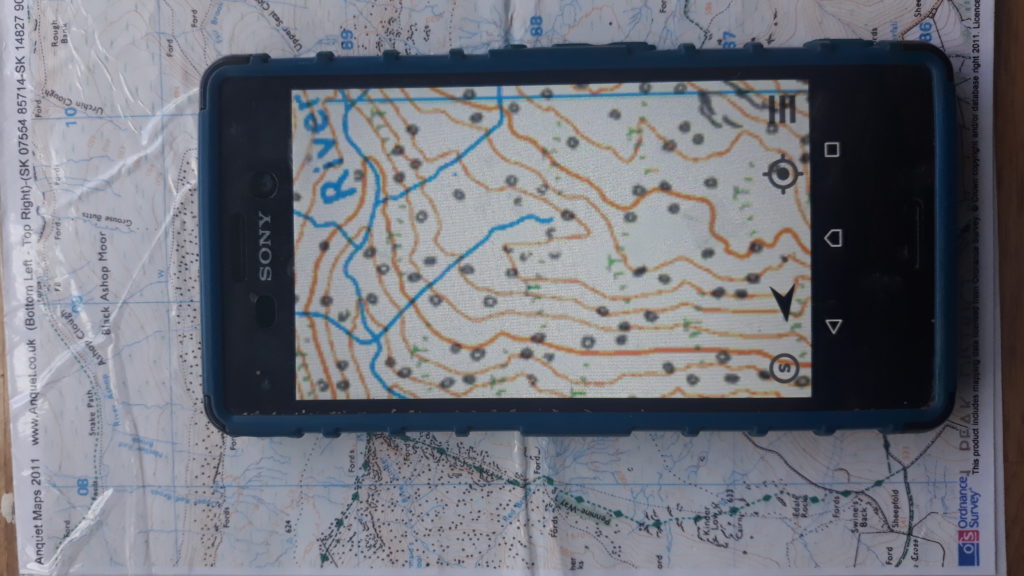 You can’t zoom in on a paper map!

Anquet Oudoor Map Navigator is great for printing maps, planning routes, reviewing walks or runs and to aid navigation. It can also be very useful as a tool to improve navigation skills. Various subscription levels are available, click on banner image below for full details:

Harvey Map extracts used with permission are the 1:25,000 Superwalker map of Snowdonia