There have been numerous design changes to running shoes over recent years; lighter materials, sticky rubber, Graphene infused outsoles etc etc but the method of keeping them on your feet has pretty much been the same – laces. You pull them as tight as feels comfortable, tie them in a knot that won’t come undone (you hope) and forget about them. Simple. So is there any scope for changing to a different system? Is there room for improvement or if it ain’t broke should we not try to fix it? 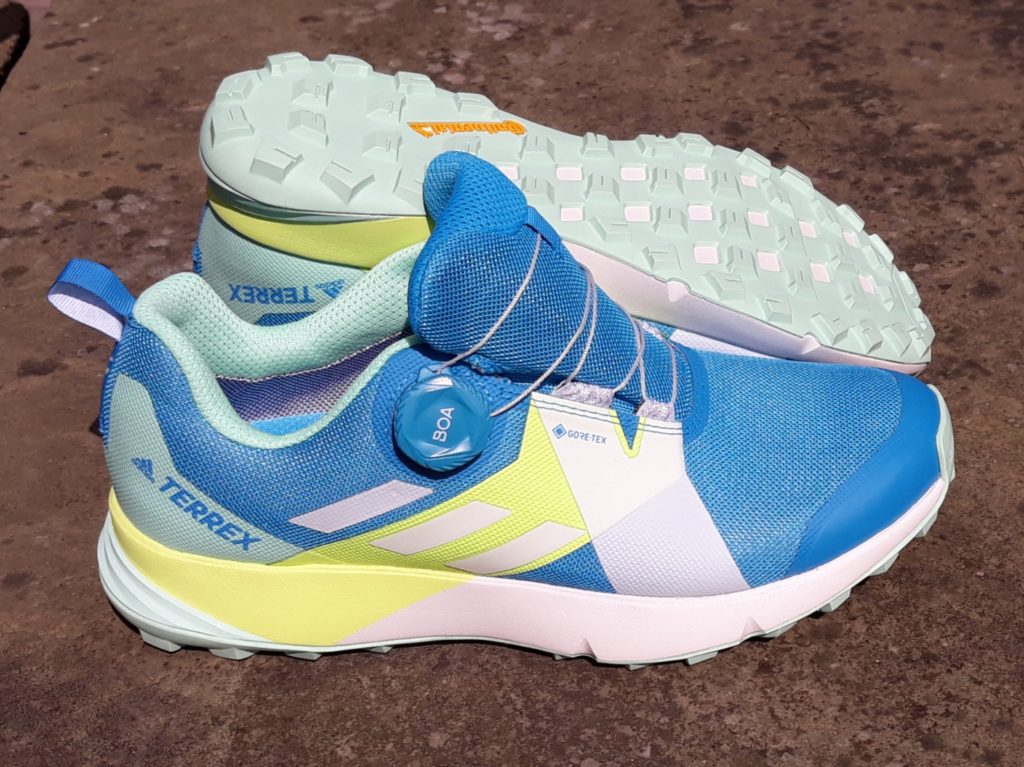 I hadn’t really given the topic much thought so I was interested when given the chance to test a pair of shoes with the Boa® Fit system. Basically this is a dial on the shoe which can be turned to tension the laces and pulled to release or undo them. The system isn’t new, it was developed almost 20 years ago as a method of fastening snowboard boots and has since been used on sports footwear such as cycling shoes, but I hadn’t come across it used for off road running shoes. The shoes I tested are the Adidas Terrex Two (GTX) and whilst I was interested in the shoe I was most keen to see how the Boa® Fit System performed. 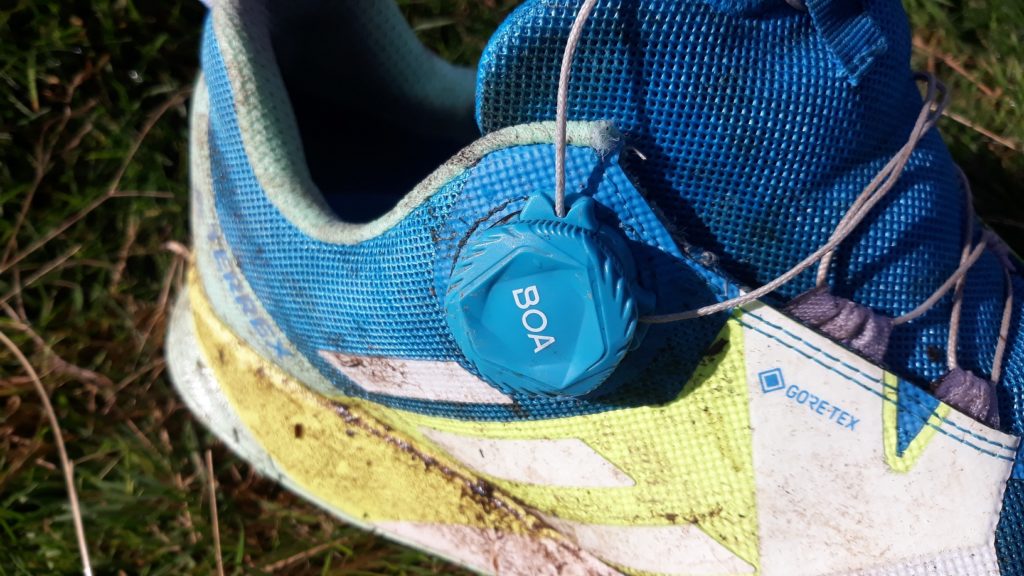 I wore the shoes for over two months, clocking up over 150 miles in a range of conditions from the hot and dry September to the more recent wet weather. As these are a trail running rather than fell shoe most of the runs were on harder or rockier trails and short grass. They aren’t designed to tackle rugged, boggy fell type terrain.  I wore them for different types of run ranging from long, fairly easy runs of up to 90 minutes to for more intense training such as hill repeats on rough ground and 1 kilometre fast intervals on hard packed trails. I used the Goretex version of the shoe, a non Goretex version is also available. 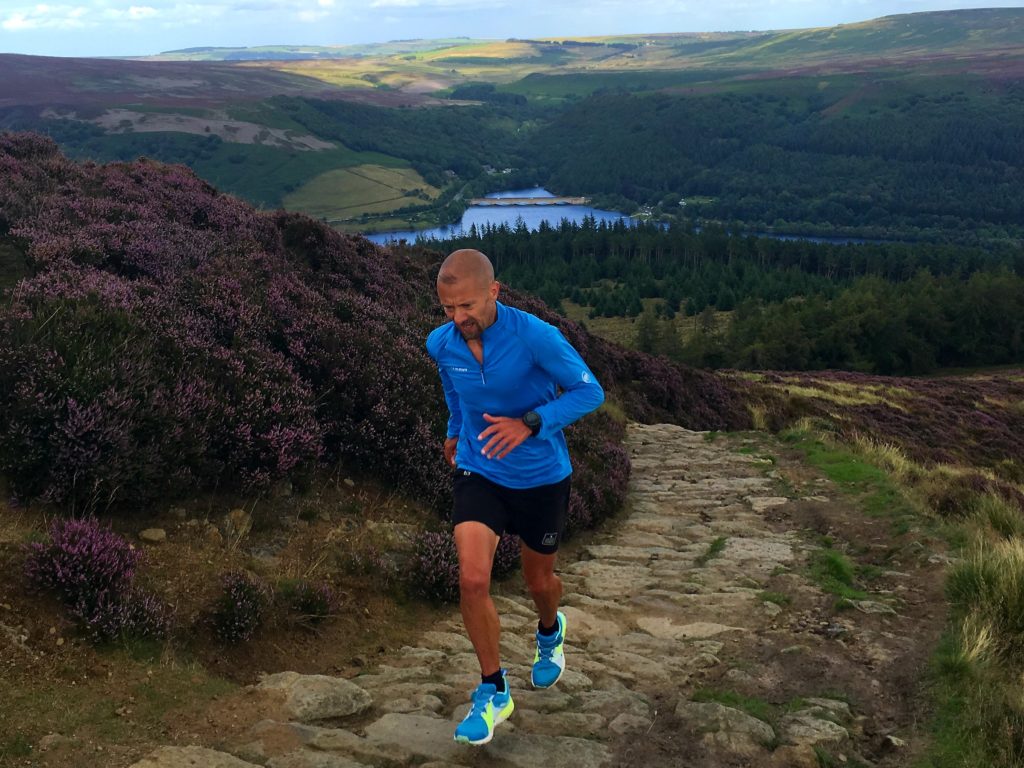 To be honest I was rather skeptical at first with a couple of concerns; one that the system was a bit “overkill” and that laces are perfectly fine, and two that the system might fail by getting mud and grit into the mechanism. After a couple of months of testing I have changed my mind slightly. Yes the system is more than you “need” and an ordinary lacing system is fine but the Boa® Fit System does have it’s advantages.

On the issue of the mechanism failing I never had any issues despite deliberately running through muddy puddles. The fact that the system is used on mountain bike shoes indicates that it can stand up to much worse conditions than found during trail running. The dial does stand proud of the shoe so it would be possible to catch it on a rock if running on very technical trails but I didn’t experience any problems. 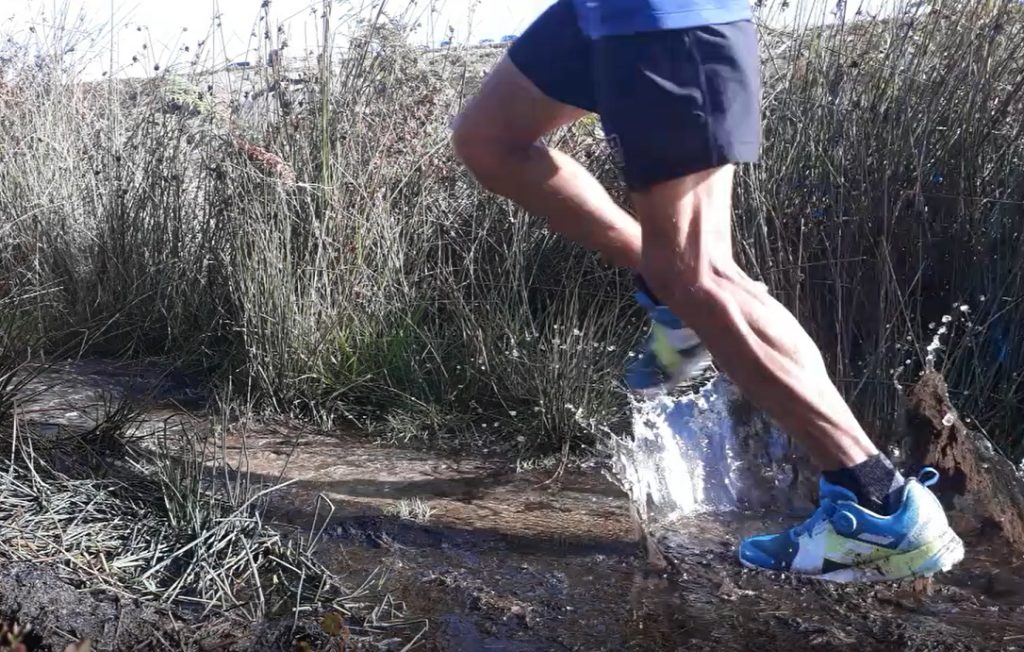 testing the shoes in wet conditions

Despite my initial skepticism I really got to like the Boa® Fit System. Admittedly it is more expensive than the same shoe with a standard lacing system but that isn’t being forced upon you, those on a tighter budget still have the choice. The ease at putting them on and off was probably their biggest attraction. I found myself slipping them on as I left the house to drive out to the Peak District then tightening them up whilst sat at traffic lights (out of gear and with the handbrake on obviously!)  The fact that they can be undone in seconds, even whilst wearing gloves or with cold fingers will be very useful as winter approaches – remember tying that knot that you didn’t want to come undone?!  As the shoes were designed for trail running rather than fell running it wasn’t possible to test whether or not the Boa® Fit System would stand up to the more rugged conditions of say the upland fells in winter conditions. However the fact that the system is successfully used in both mountain biking and ski / snowboarding suggests there is no reason why not.

This video shows just how easy it is to tighten and undo the shoes:

As for the shoes themselves they are a reasonably lightweight trail running shoe, my pair of the Goretex version size 7 weighing 625g. Given the choice I would opt for the standard over the Goretex version – Goretex works well for short durations but if you are out for any length of time or in heavy rain I find that your socks get wet and water soaks down into the shoes. Also any deep puddles that create splashes have the same effect with water getting in through the foot hole rather than soaking through the fabric. Once water gets in, because the Goretex doesn’t allow the shoes to drain freely, you end up running around with water sloshing in your shoes!

The fit is fairly wide and obviously suits that particular foot shape, it might not suit those with narrower feet particularly for example when descending technical trails. The outsole with Continental rubber gave a good grip on hard packed and rocky ground even in wet conditions but the lugs aren’t deep enough to cope with muddy conditions. These are a trail running rather than fell running shoe. 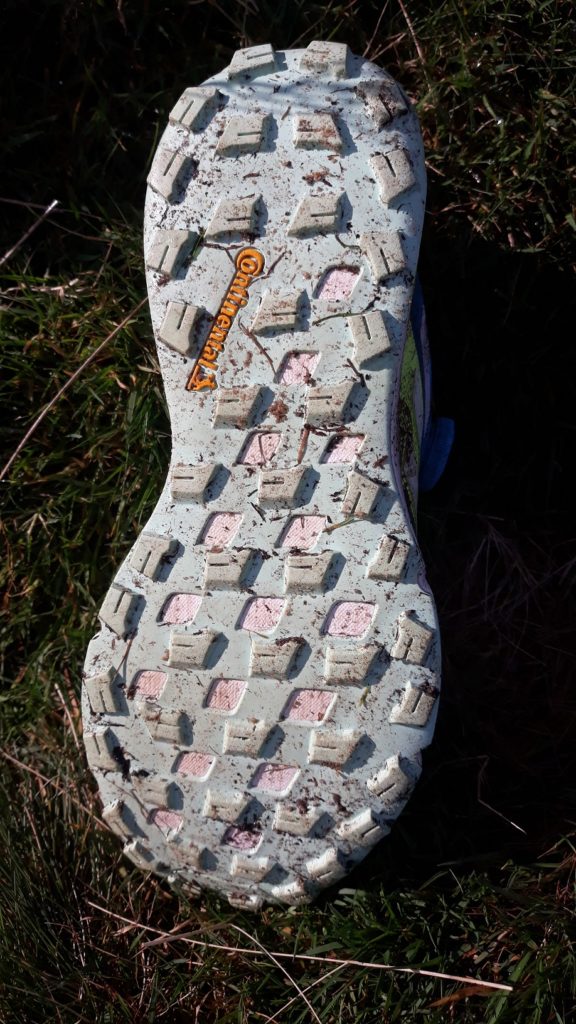 good grip from the Continental rubber

The Terrex Two have a 5 mm drop (heel 24.5 mm / forefoot 19.5 mm) which feels quite responsive and good for moving quickly on rough ground yet with enough cushioning to make faster paced running comfortable. I have found them to be a good choice for faster paced interval training on hard packed trail terrain.

Not the cheapest shoe on the market (the standard lacing system is £30 cheaper) but in line with the likes of rival brands such as Salomon and Inov-8.