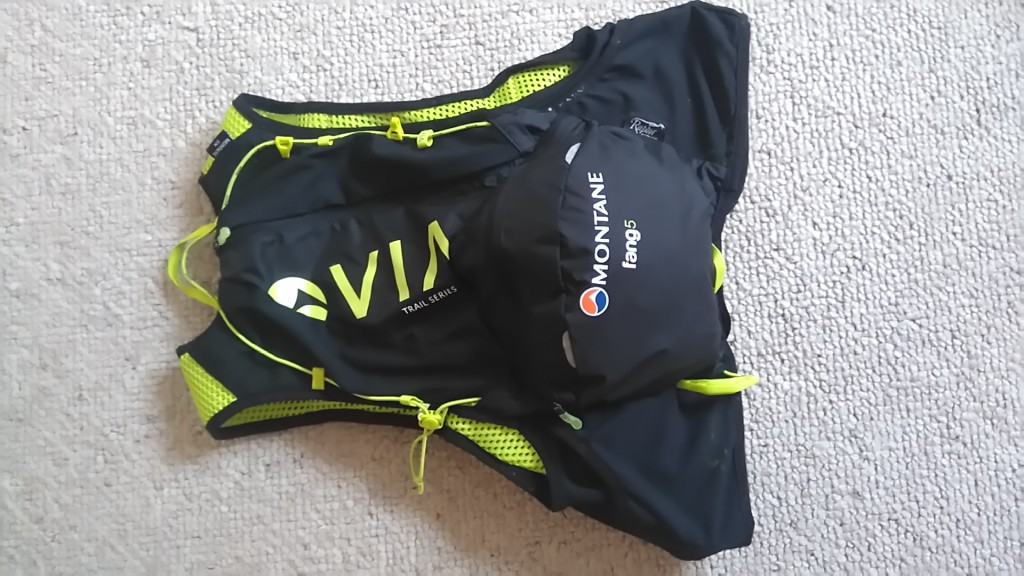 I have used a Montane Jaws 10 running pack for a while now on long training runs, certain long races and for my day to day running work and so I was interested to see what changes had been made for the 2016 updated VIA Trail Series. Here I test the smaller Fang 5 pack.

The VIA Fang 5 pack comes in two sizes: S/M and M/L. I have the S/M which weighs 270g when empty. The most notable feature of the new Trail Series version is that it no longer uses rigid water bottles affixed to the shoulder straps, but opts for twin 500ml soft-flasks (supplied) instead – so no more sloshing! These are housed in pockets on the front straps of the pack, one of which is zipped, the other an open top stretch mesh. Above these are two smaller pockets, again one with a zip the other open topped stretch material. With the soft-flasks stashed in the lower pockets the upper ones are ideal for storing gels, compass, phone, car keys etc. The zipped pocket contains a small emergency whistle which can be removed if required. 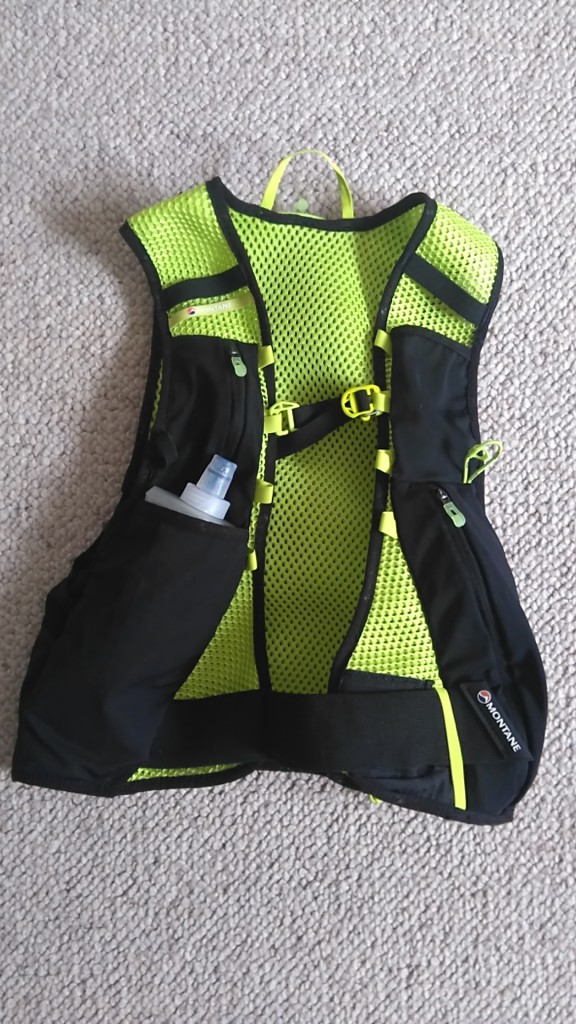 In addition to the four front pockets there are also two stretch pockets, one on either side of the pack above the hip. These are easily accessible whilst wearing the pack and are ideal for storing hat, gloves, food or a folded map section. 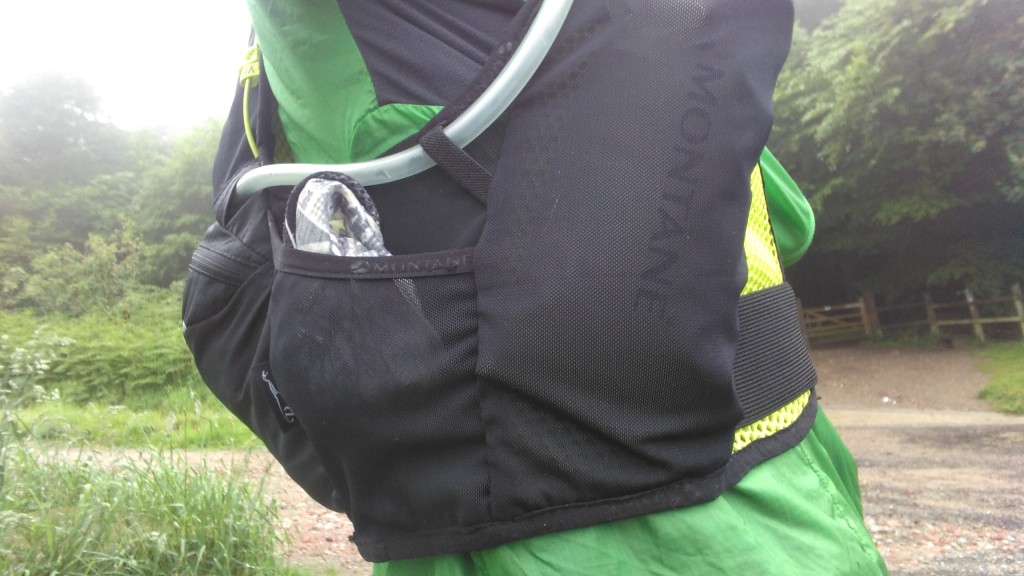 Although the Fang 5 comes supplied with two soft-flasks there is also the option of using a bladder (not supplied). A large rear pocket with hanging loop will house a 1.5 litre bladder whilst loops on the right hand side of the pack retain and route the hose. If you choose not to use a bladder, this pocket can be used for additional storage but you’d need to pack it carefully as the mesh material offers little in the way of padding. 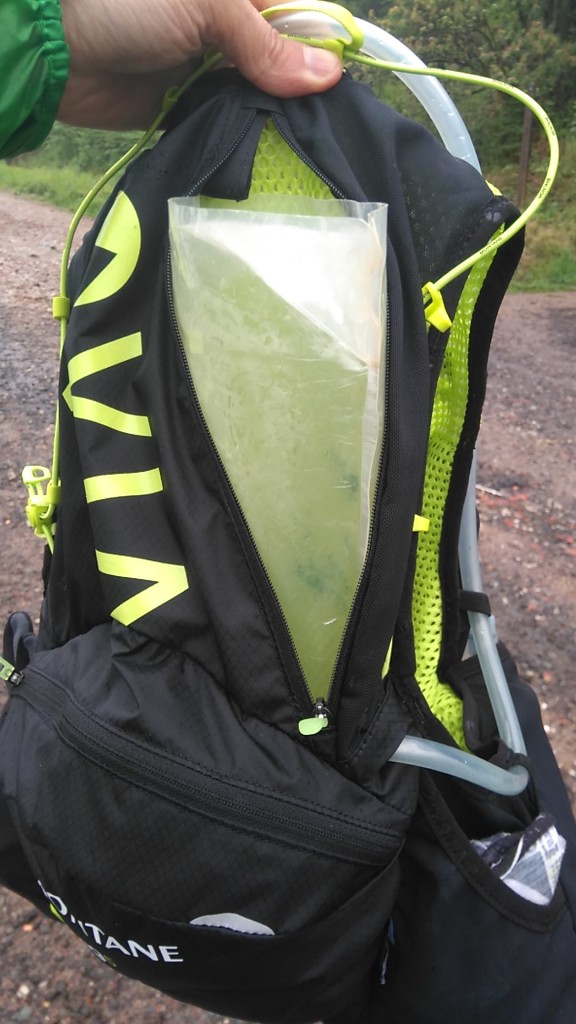 Low down on the back of the pack is a zipped, water resistant pocket that is large enough to carry a set of lightweight waterproofs. This ensures that the bulkiest items are carried low down and adds to the pack’s stability. An elasticated bungee cord allows the pack to be cinched down if required although I have never needed to use this. Two smaller bungee loops form an attachment point for carrying poles; not something I would use in fell running although the higher loop makes a handy attachment for a compass lanyard. 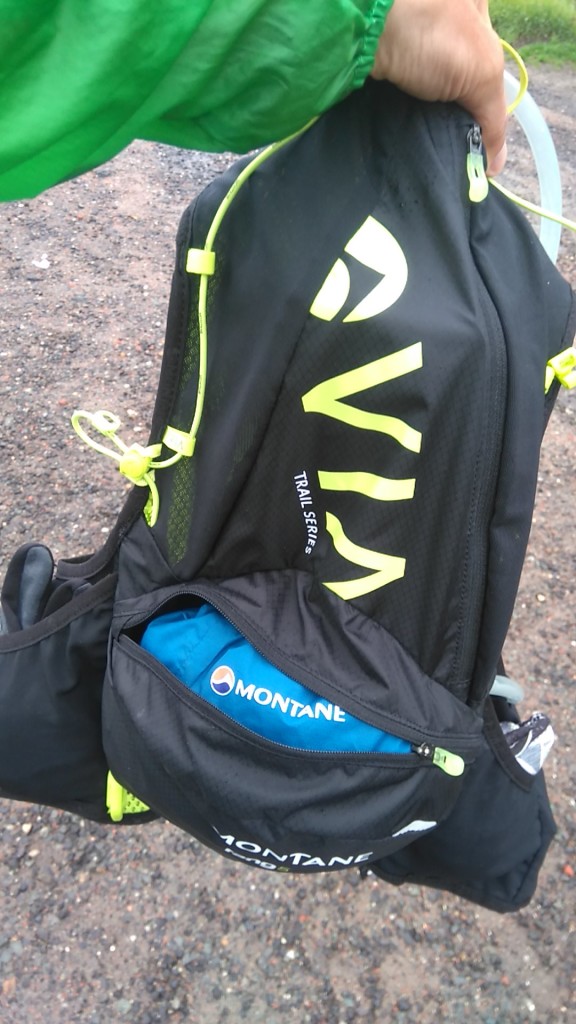 The pack is fastened using a wide, elasticated hook and loop belt at the waist and an elasticated chest strap that can be adjusted by clipping to any of four attachment points on the front straps. 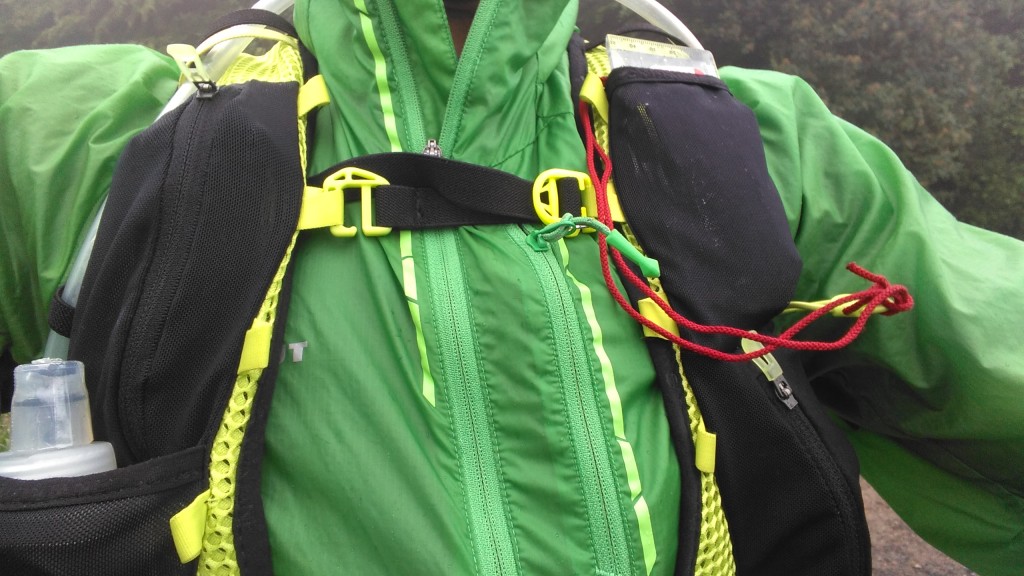 The elasticated waist belt allows the pack to be fastened snugly and because the belt stretches, along with slight elastication in the main chassis, the pack expands with your ribcage rather than feeling constrictive. 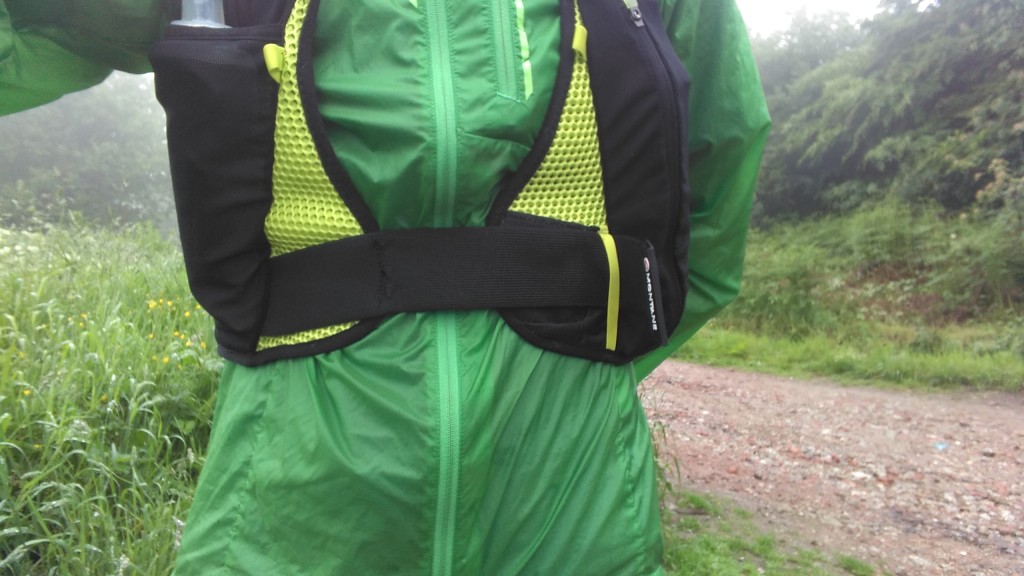 On the top of each shoulder strap a small elasticated tab allows a rolled up map to be carried and forms a retaining point for the optional hose system. 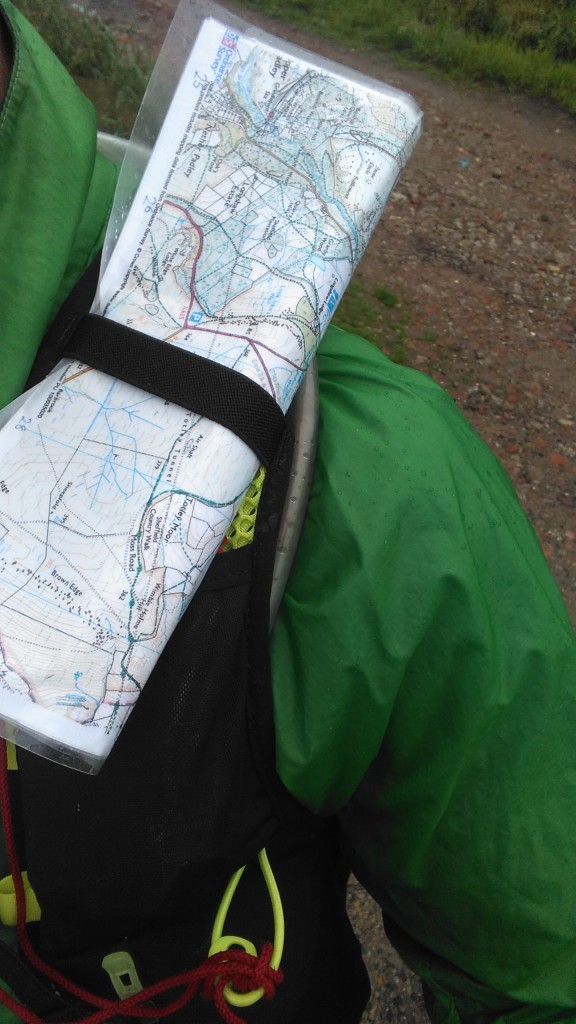 map can be carried in shoulder loop

The Fang 5 is a very comfortable pack. I like the way the elasticated waist belt can be fastened tightly so that the pack fits snugly and doesn’t bounce around when running quickly or whilst descending. Despite the snug fit the Fang doesn’t feel constrictive, if you bend forwards to adopt a hands on knees approach to attack steep climbs the elastication in the pack adapts to your change of position rather than restricting your movement and breathing.

The amount of pockets and hydration options make it a really versatile pack. There is plenty of accessible storage from the hip and front pockets and using both soft-flasks gives you up to a litre of drink. Take just one soft-flask and you have another spare pocket or add a 1.5 litre bladder and you have enough fluid for a long run or race where replenishing water supplies is an issue.

What could be improved:

Very little. If I was being picky I would say that the hook and loop material sometimes snags on things such as other pieces of clothing and so I find it best to store the pack with the waist band fastened. The chest strap only fastens on the right hand side meaning you need to undo it with your left hand, whereas my older Jaws pack fastens on the left so it takes a little getting used to.

When would I use it:

The new Fang is ideal for long training runs or longer races when I want to carry more kit than I can comfortably fit in a bum bag. It would be a good choice for long days out or 24 hour attempts such as the Bob Graham Round. I used it on the Marsden to Edale “Trigger” race when the bad weather conditions meant that I wanted to carry more kit than on a normal race. The race required frequent use of map and compass which were easily accessible in the front pockets, much more so than with a bum bag. 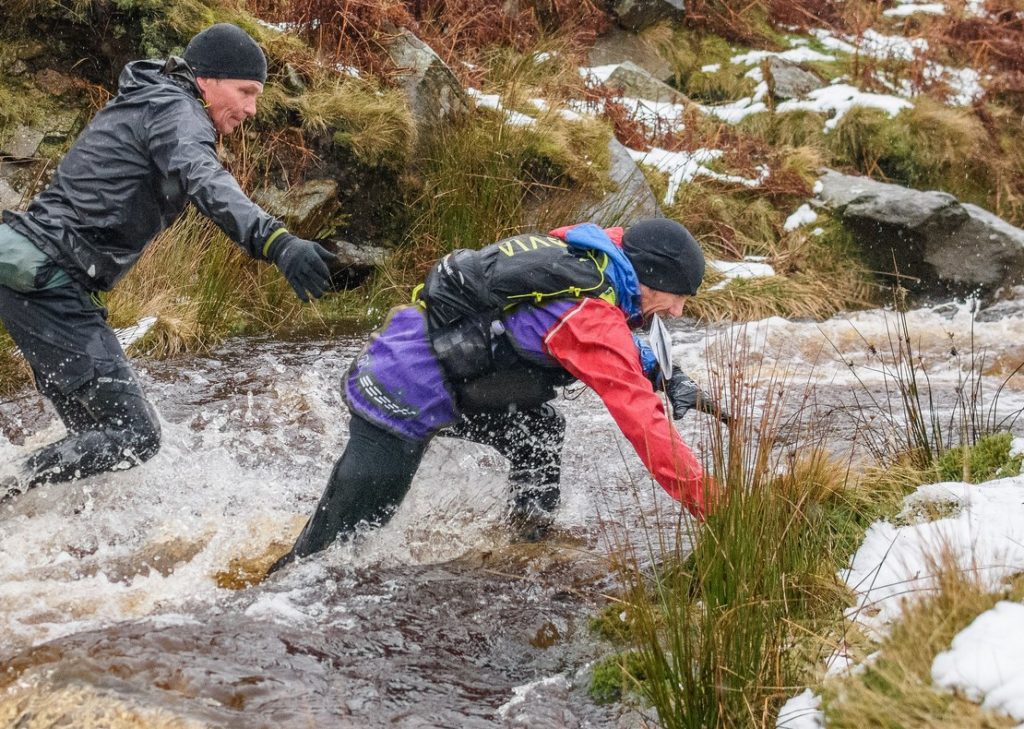 Using the Fang on the Trigger fell race

A comfortable, versatile pack with lots of storage options. I’ll use it a lot.