The Mountains are Calling: Running in the High Places of Scotland is a new book that explores the sport of hill running.

As well as characterising a sport that eschews commercialism and heralding its characters and culture, the book covers the history of Ramsay’s Round, Scotland’s 24-hour classic mountain run. In this guest post, Jonny Muir, the author of The Mountains are Calling, explains what it takes to be a ‘Ramsayist’.

Ramsayist (noun) – A person who has completed Ramsay’s Round

As the minutes ticked down to midday on 9 July, 1978, Charlie Ramsay tore down the lower slopes of Ben Nevis. He crossed a footbridge over the River Nevis and halted by the glen’s youth hostel. The clock stopped. In the previous 23 hours and 58 minutes, the runner had passed over the summits of 23 Munros – Scottish mountains of at least 3,000 feet (914 metres) – in an immense loop, starting where he had finished. No-one had climbed so many Munros in a day; nor would anyone do so again for almost a decade. Scotland’s classic 24-hour round – encompassing 60 miles of rough and wild mountain running, and an Everest-amount of ascending and descending – was born. Unashamedly, the originator called it Ramsay’s Round.

Nine years passed. Others tried; they all failed. Finally, in 1987, a second runner, Martin Stone, closed the circle, and by the end of the 1980s there were a further four successes, taking the number of completions to six. At the same time, 656 people had already achieved the Bob Graham Round, England’s equivalent 24-hour mountain running challenge. At the start of 2000, Ramsayists numbered just 26, with every victory in these capricious mountains hard-fought. Nine of the 20 completions in the 1990s took at least 23 hours. The first winter round came in 2002 – in an astonishing 55 hours. It would be another 11 years before anyone could breach 24 hours in the winter months.

Ramsay’s Round is, indisputably, the hardest of the three classic rounds – the jewel in the crown: the highest, the hardest, the roughest, the toughest, a place of superlatives, a place of devastating unpredictability at any time of year. Today, there are 105 Ramsayists. Even then, the round has never been accomplished in March, October or November. Some years – most recently in 2001 and 2012 – no-one made it around. Of the 105, only five – a hill running who’s who: Belton, Spinks, Bragg, Ascroft and Paris – have dipped under 20 hours.

So what does it take to be a Ramsayist?

The would-be contender need not look beyond the preparation of the round’s pioneer. After switching from the road, Charlie Ramsay ran the Bob Graham Round and twice completed Tranter’s Round. He was highly-competitive in hill racing, finishing the Ben Nevis Race in a time that would place him in the top 10 in recent races. In the six months prior to his attempt, Charlie amassed 1,600 miles of running and walking, and climbed a cumulative 80,000 metres, with much of his training spent in the high mountains of Lochaber rehearsing his pathless route. Even then, Charlie was two minutes from being timed out.

There is no secret to running Ramsay’s Round – 105 people have proved that. It is gained by effort, by resolve, by obsession – and a willingness to suffer. There is no other way it can be done.

In the list of Ramsayists, Charlie is number 1; some 39 years later, I would become number 101. After 14 hours, as I began what is known as the Lochaber Traverse, the eight-Munro stretch from Stob Bàn to Ben Nevis, I was suffering in a way that was both predictable and awful. I was sleep-deprived, weather-beaten, utterly exhausted, frustrated and unable to stomach food. I struggled on, over Stob Bàn, then down and up again to the first of the Grey Corries, Stob Coire Claurigh.

As I touched the highest stone on the cairn, I was imbued with a sense of certainty. The idea of returning to the start within 24 hours – a notion that was preposterous an hour earlier – was suddenly no longer a question. There seemed no way I could not do it. At the time, it was as if a decision was made there – as I lingered on the quartzite crown of Stob Coire Claurigh. The reality was far more complex. This ‘decision’ was the consequence of hundreds of decisions: the many hours spent in these mountains, the thousands of miles over two decades of running, and countless metres of ascending – always ascending. Ultimately, it boiled down to those three words: effort, resolve, obsession – and an acceptance that the doing would hurt.

Ramsayist number 100 is Alicia Hudelson, an American ultrarunner who finished her round some six hours before me. She is another who knows what it is to suffer. As she made her way along ridge and rubble between Carn Mòr Dearg and Ben Nevis, she too wondered how she would ever make it back to Glen Nevis. Again, there was no secret. ‘Sometimes even the boring approach of simply trying harder can work,’ she concluded.

When I spoke to Robbie Simpson for The Mountains are Calling, in the months before he had even gained a qualifying time for the Commonwealth Games, let alone clinched a bronze medal, he offered a metaphor for the sport of hill running – and Ramsay’s Round in particular. ‘If was easy,’ he said, ‘everyone would do it.’

It is not easy – but to be among the company of Ramsayists is not the preserve of a hill running elite.

In 2016, John Parkin, a West Yorkshire primary school teacher, came to Glen Nevis seeking to complete the ‘big three’. His hopes seemed fanciful: he had concluded Bob Graham and Paddy Buckley rounds with just 20 minutes to spare across the two. However, descending Mullach nan Coirean, the last summit on a clockwise round, John realised he was going to get around within 24 hours, becoming the 44th person to complete the three classics.

‘I look at the names on those short lists and see race winners and fell champions,’ he reflected after. ‘I have raised myself to exalted company.’ 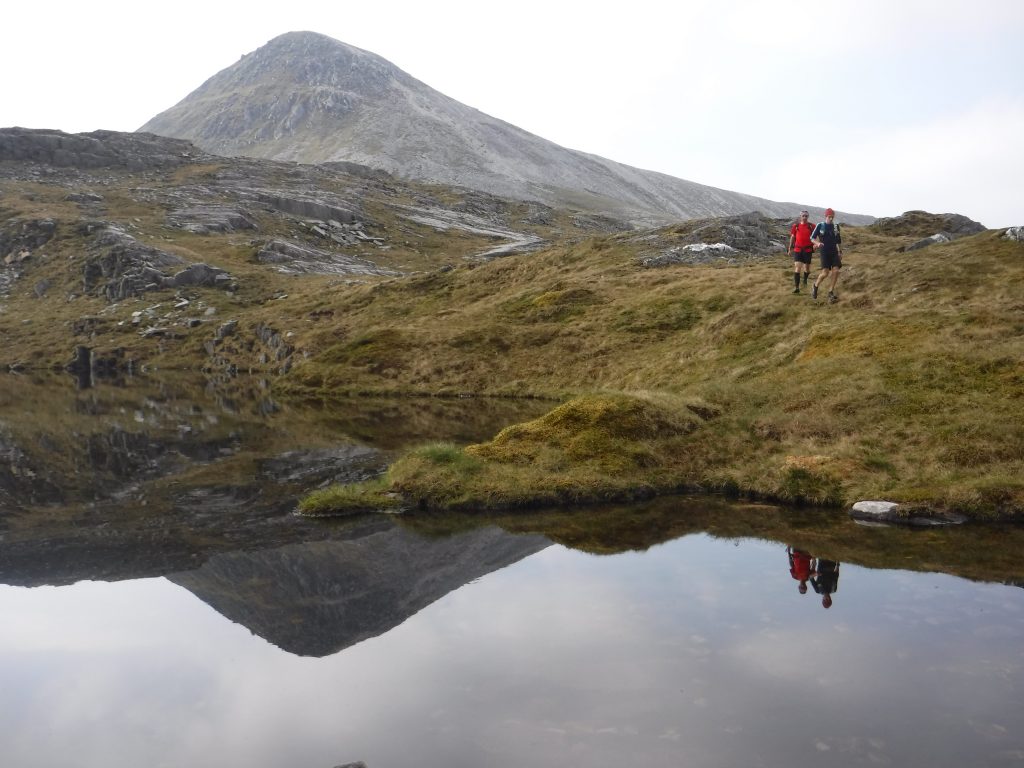 Runners on Ramsay’s Round (Mark Hartree)

Jonny Muir was a nine-year-old boy when the silhouette of a lone runner in the glow of sunset on the Malvern Hills caught his eye. A fascination for running in high places was born – a fascination that would direct him to Scotland. Running and racing, from the Borders to the Highlands, and the Hebrides to the hills of Edinburgh, Jonny became the mountainside silhouette that first inspired him.

His exploits inevitably led to Scotland’s supreme test of hill running: Ramsay’s Round, a daunting 60-mile circuit of twenty-four mountains, climbing the equivalent height of Mount Everest and culminating on Ben Nevis, Britain’s highest peak – to be completed within twenty-four hours.

While Ramsay’s Round demands extraordinary endurance, the challenge is underpinned by simplicity and tradition, in a sport largely untainted by commercialism. The Mountains are Calling is the story of that sport in Scotland, charting its evolution over half a century, heralding its characters and the culture that has grown around them, and ultimately capturing the irresistible appeal of running in high places. 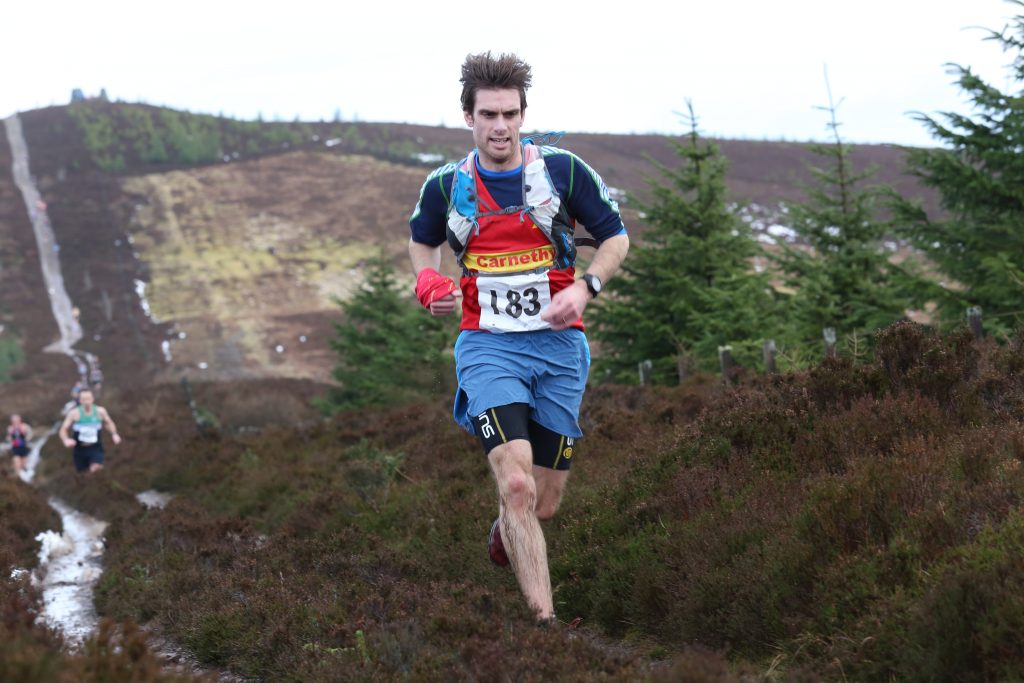 Jonny Muir, author of The Mountains are Calling

Jonny Muir is a writer, runner and teacher. He lives in Edinburgh. The Mountains are Calling is his fourth book.

The Mountains are Calling is available from Amazon, and other good bookshops e.g. Waterstones

I completed the Charlie Ramsay Round myself in 2016, you can read about my experience here https://fellrunningguide.co.uk/charlie-ramsay-round/