Following on from the UT32, Nitecore have produced another lightweight, dual beam head torch; the UT27, available from November 2021

The UT27 is simple in its design with the battery housed in the same unit as the lenses. Having the battery on the front of the head rather than in a separate rear housing can sometimes make head torches feel “top heavy” and unbalanced but not this one. The UT27 weighs in at a remarkably light 75g including battery. This is one of the lightest head torches that I have come across, at least that can realistically be used for fell running. The main body of the torch is plastic and although lightweight it doesn’t feel flimsy. The torch has two separate lenses mounted side by side; floodlight and spotlight and operation is by two buttons (W and T) on the top of the torch which control each of the beams respectively. I don’t know what W and T stand for, F and S would make more sense! The UT27 has an IP66 rating so should be water tight even in really bad weather! The battery compartment glows in the dark after it has been illuminated – theoretically that could make changing the batteries easier but it would still be a tough challenge without a second light source and not something I’d be wanting to try whilst out on the fells in bad weather! The torch comes supplied with battery, recharging cable and a small carry bag that acts as a diffuser which is useful when in a tent. 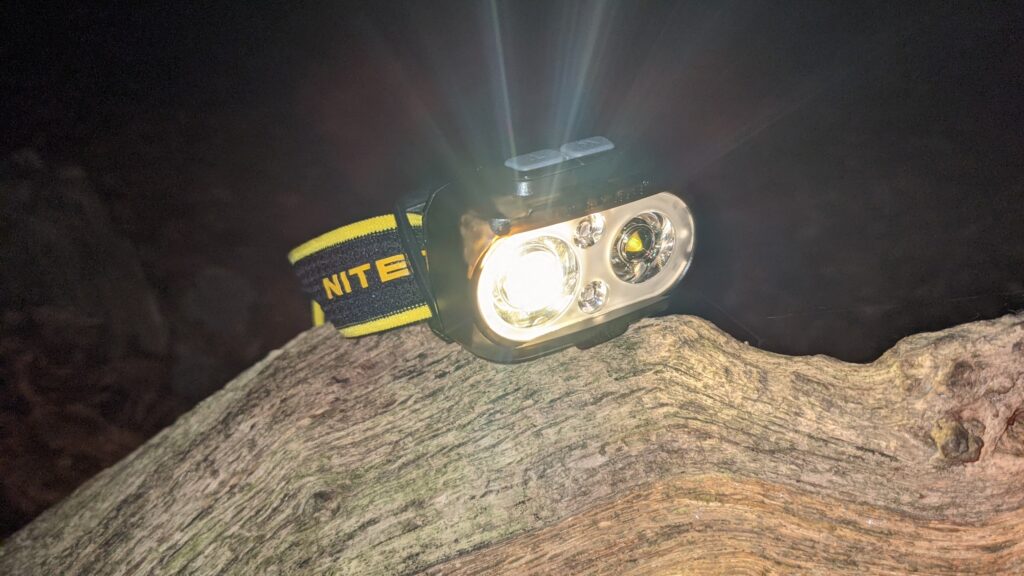 The UT27 is versatile in that it uses both a rechargeable Li-ion 1300mAh battery pack (supplied) as well as standard AAA batteries. The pack is recharged via the supplied USB-C cable and can either be removed from the torch or left in place with the battery compartment open during recharging. An LED on the battery pack turns from red to green when fully charged.

Claimed battery life ranges between 6 (Spotlight HIGH) and 13 hours (Floodlight LOW) although I haven’t fully tested this claim yet. 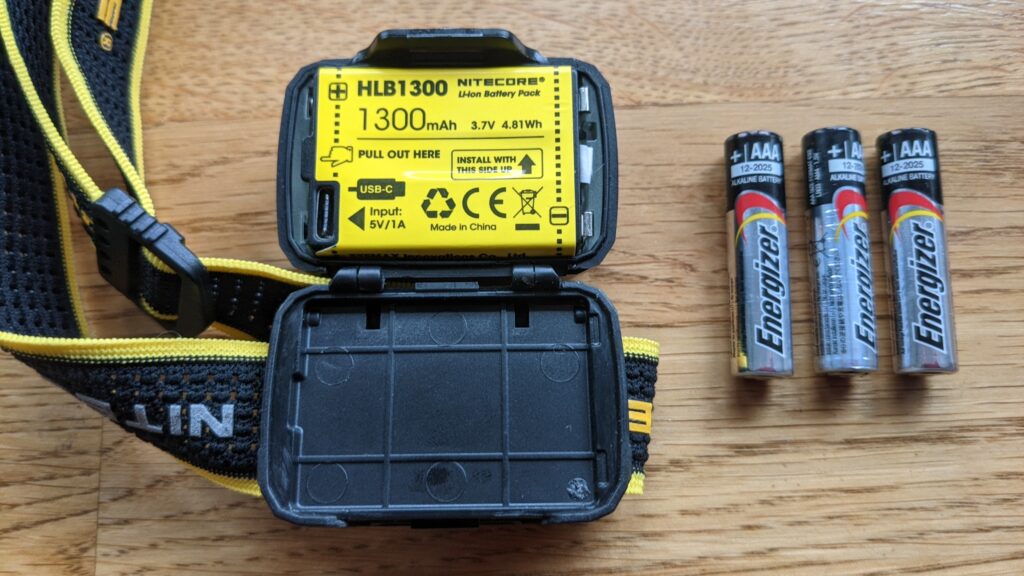 Each lens has two settings; simply high or low. Floodlight High gives 200 lumens, Low 55 lumens. Spotlight High gives 400 lumens, Low 100 lumens. There is also a Turbo mode where both lenses are illuminated giving 520 lumens. Two single LEDs also give either constant or flashing red light, useful for emergency signalling or when you only need a very low setting. These red LEDs also indicate how much battery power is remaining. Each button controls each beam i.e. one button (marked W) for the floodlight, one (marked T) for spotlight. A long hold switches that particular lens on after which another press toggles between high and low brightness. To switch to the other lens simply press the other button. A quick double press of either button turns on turbo mode which automatically turns off after 30 seconds to preserve battery life if you forget to turn it off manually. The red LEDs are turned on by double clicking either button from when the torch is off. The torch can also be locked off to prevent it being switched on by accident.

a button for each lens

I found the Nitecore UT27 easy to operate. The twin buttons on top of the torch are reasonably easy to use whilst wearing gloves and the sequence of presses is fairly intuitive. The two beams are noticeably different, the floodlight giving a white light whilst the spotlight is a much warmer yellow light. This yellow beam is unusual compared to most other head torches that I’ve used and does take a bit of getting used to although I  do find it better for map reading as there is less harsh, reflective glare than with the white beam. In spotlight mode on high power the beam gives an impressive throw of light; 128 metres according to Nitecore’s statistics. 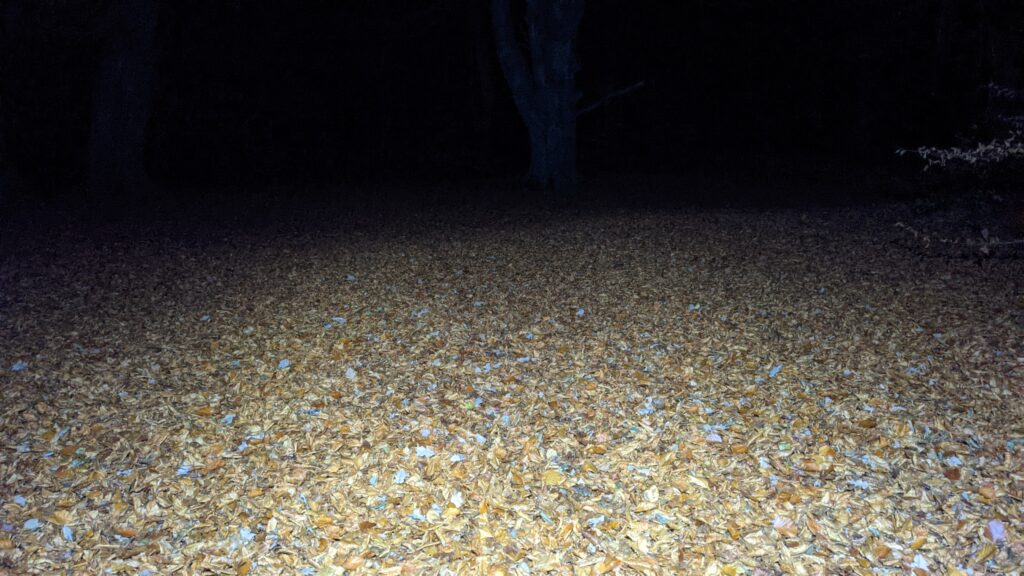 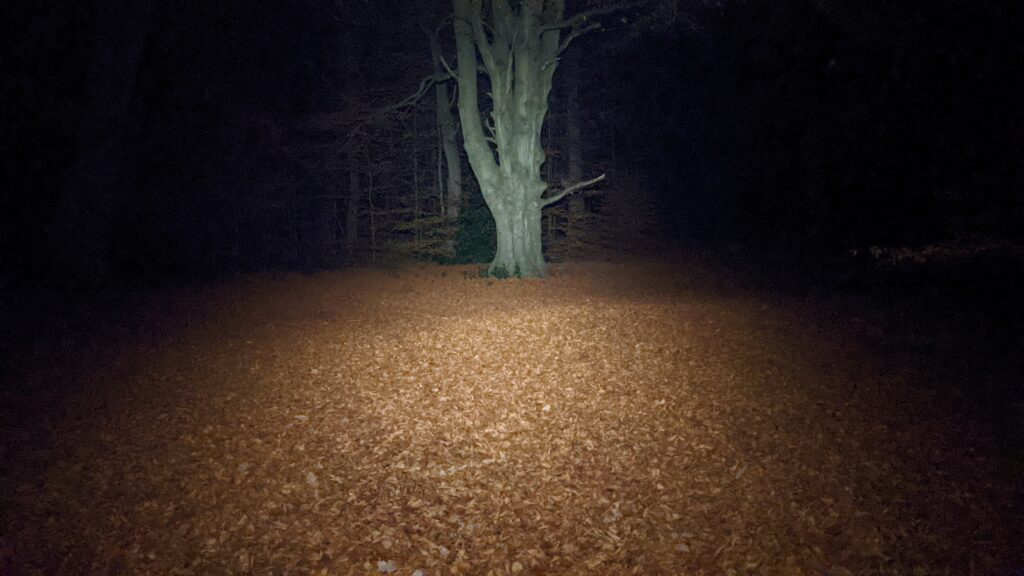 The torch can be angled down through a number of positions as far as 90 degrees (useful if tying your laces or looking in your bumbag) and the ratchet is firm enough that the chosen position stays fixed, even when running on uneven ground. It is comfortable to wear and the light weight would mean that it would remain so for extended periods, you hardly notice the weight. 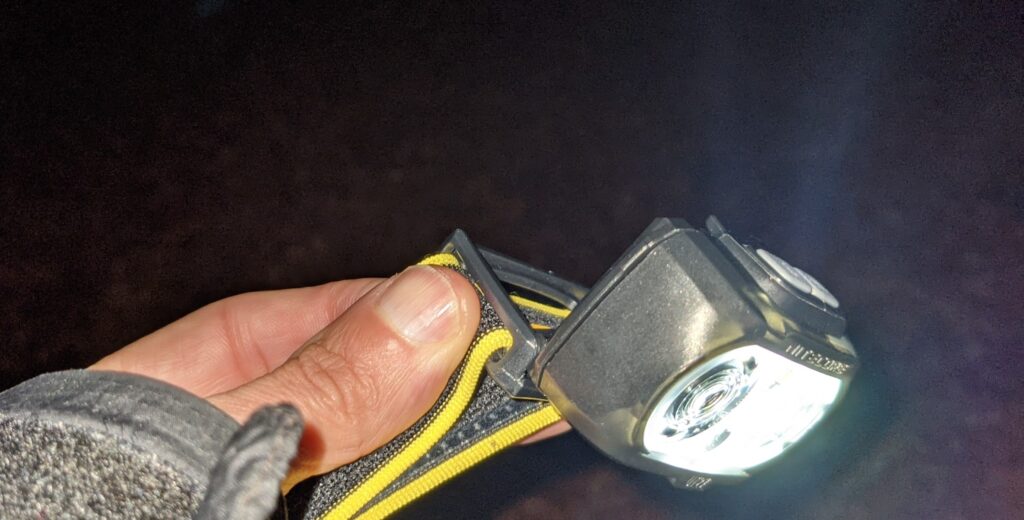 Overall I’m very impressed with the light weight and ease of use of the Nitecore UT27. It’s a great little torch for fell running and takes up very little room in a pack. It would be a good option for camping as well as running.

Not the cheapest, yellow light takes a while to get used to.

Claimed 74g including battery and headband (75g on my scales)